Always pay attention and you will always learn something. I love learning something new and I love fishing in places I have never been. Fishing free is a whole different kind of fishing and by doing something you’ve never done before on a place you never been almost forces you to do that. I learned a long time ago in Golf to watch people I would play with to always learn something, even the smallest slightest thing. This day would be no different. Special days in fishing are something you never forget and when you have that kind of day with one of your good buddies it makes the day that much better and something that you will always talk about. I recently got treated to a day on Candlewood Lake in Connecticut from a bet with my buddy Matt. We wanted to hit the lake pre-spawn before tournament season kicked into high gear for the both of us. I had always heard of a vicious jerkbait bite down there in the spring and with not having any chance at smallmouth yet this season; I was chomping at the bit to get down there. 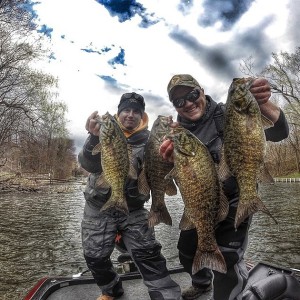 Leading up to the trip we had discussed another technique that might be a big player for our day on Candlewood something that I had never fished before; hair jigs. Now, when I say hair jigs I am not talking the jigs of fame on the Tennessee River impoundments that splashed on the scene last summer. I am talking about finesse (big understatement) hair jigs. 1/8 oz. on light line and spinning tackle. I am always up for learning something new when it comes to fishing and I consider myself a pretty fast learner so I was ready. I call him up the day before to make sure I have everything I need and he goes: “Hey I was thinking, I might throw an A-Rig in the boat just in case.” Again I haven’t ever thrown one because I can’t use them in my neck of the woods so I said “I bought one a while ago and have never used it but I’ll go to the looney bin with ya.”Matt told me the setup I needed to bring and I came ready to play.

Let’s go deeper into the two major players for the day and how I set them up. My hair jig setup was an 1/8 oz hair jig all black with 10lb Pline TCBX-8 Braid and a long 4lb Pline Fluoroclear leader. I threw this setup on a Denali Jadewood J2 Series Dropshot rod paired with a Team Lew’s Goldspin 2000 series reel. Two key aspects of this setup are crucial; the rod and the line. Long  rod to make long casts with a light bait and low power so you don’t overdo it. The lighter line helped with longer casts especially given the wind and that light line also just let the bait do it’s thing in the water. My A-Rig setup could not be more opposite. 7’6″ Denali Noirwood Flippin’ Stick with a Lew’s Super Duty 7.1:1 and 65lb Pline TCBX-8 braid. That backbone was needed big time because they just freight trainwrecked that rig when they bit and you needed every bit of torque you could get.

We check the weather when I get there the night before, I get rigged up and we have some laughs and it’s go-time in the morning. Well the funny thing about that weather report was IT WAS COMPLETELY WRONG! Partly sunny, south wind 10mph, and high 50’s/low 60’s. Nope! North wind gassing 20+ clouds and at times snow. I pick Matt’s brain on the drive about this hair jig bite so I know what I’m in for. He tells me; elephants eat peanuts and the bait just catches em, just let it do it’s thing and don’t horse em. We pull up to the first spot a big boulder point with the wind blowing around it and I just watch what he does with the jig. How he casts how he retrieves so I can get more keyed in on what I needed to do. It didn’t take long, on my third cast with this hair jig my rod just loads up. It’s a bite I never really felt before and hard to describe it just gets heavy and your rod just goes. Quality fish in the boat and I feel like I got the bite down. Matt throws the rig on the wind swept side of the point and connects with another solid smallmouth.

The rig bite was just about putting that thing in front of them and slow rolling it with little flares of the reel handle to get the rig to jump. You wouldn’t think on a day where a small hair jig was catching them that this ugly hardware going through the water would also get bit but man did it get bit. The great thing about it was the anticipation of the bite. You know just by looking at this thing that small fish won’t be an issue and with that many swimbaits in play there is always the chance of multiples. We never ran into multiples but we never ran into the small fish either. These smallmouth that ate that rig were so angry and just about took your rod out of your hand. After my first one came in the boat that’s all I wanted to throw I was addicted to that violent attack.

What happened over the course of the next 8 hours was some of the best smallmouth fishing I have ever been on. The bite windows were short and we only had 14 bites all day but they were all solid 3-4 lb class fish. On the way back to the ramp we were talking about how much weight we thought we had. We heard tournament stories from a weekend close to our trip of 30lb bags taking the win. We knew we had some tankers in the box but we thought we were closer to 24-25 lbs. After all was said and done our best 8 keepers went for 28.65lbs. Most came off hair jigs with a few A-Rig fish mixed in but what a day especially given the conditions we faced and two patterns that could not be more opposite from each other. A big thank you to my buddy for bringing me there and a bigger shout out to Candlewood who just showed herself big time that day.